I'm looking for...
Return to Headlines

Nathan Salstone, lives in New York and until the pandemic was appearing on Broadway as an ensemble member of “Harry Potter and the Cursed Child.” He was also one of Music Teacher Abby Blair’s first students, and an NBJH alumnus. After Mrs. Blair reached out to Nathan on Twitter, he was happy to be a special guest this week for the fifth-grade Musical Theater Club, sponsored by the elementary art and music teachers.

Providing inspiration and guidance on preparing for an acting role, Nathan spoke from the experience he has gained from being in over 20 professional productions.

“If you hold onto your imagination, it will take you so far,” he told the students.

The club is offering a STEAM experience for interested fifth-grade students throughout the district, who would normally be preparing for a musical production. They are studying all aspects of musical theater, including costume-making, lighting, set design, and acting. 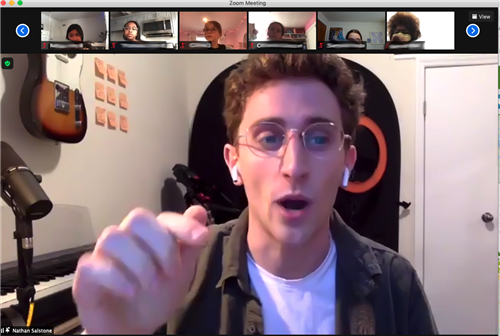